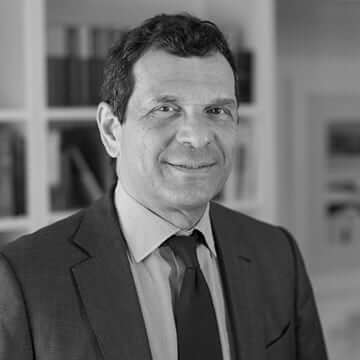 Michael Tsibris
Managing Partner
T:+ 30 210 3626888
F:+ 30 210 3631631
E: mtsibris@souriadakistsibris.gr
Michael is one of the two Co-Managing Partners of the firm and leads the corporate and financial regulation team.

He has over twenty-five years of experience in Financial Regulation and Capital Markets transactions, in Banking and Insurance, as well as in all types of Mergers and Acquisitions.

Prior to joining Souriadakis Tsibris, he worked as an associate for Zepos & Zepos and later he was name partner at Moussas & Tsibris. He has actively participated in some of the major transactions in the Greek capital and M&A markets, such as the privatization of the Greek Telecom via several stock exchange transactions, the acquisition of Aluminium de Greece by Mytilineos Group and the sale of a large stake in one of the major mobile carriers, Cosmote. As the preferred legal counsellor for the Greek arm of one of the major multinational insurance groups, he has also amassed considerable experience and expertise in the field of insurance regulation, supervision, contracts and litigation.

Michael was member of the Committee for the Codification of Capital Market Regulations at the Ministry of National Economy and to various ad-hoc committees drafting legislation for the privatisation of the Athens Exchange and later its Regulation – on behalf of the Capital Market Commission. He is regularly appointed member of ad-hoc committees advising on important financial regulation issues or preparing relevant rules for submission to Parliament.